A new study by the Platform for International Cooperation on Undocumented Migrants (PICUM) of 10 European countries shows that half do not grant protection through secure residence permits to undocumented victims of domestic violence. In these countries, undocumented people risk detention and deportation if they report domestic violence to the police.

The study considers EU and international legal frameworks that provide for residence permits for certain victims of crime, and looks at national legislation in 10 European countries (Belgium, France, Germany, Greece, Italy, the Netherlands, Poland, Spain, Switzerland and the UK) implementing such measures.

Alyna Smith, Advocacy Officer at PICUM, said “Incidents of domestic violence during confinement measures are on the rise, as highlighted by the United Nations, the Council of Europe and the European Parliament. Undocumented women facing abuse at home have even less recourse to protection because they fear detention and deportation if they seek help. Countries that offer residence permits for survivors of domestic violence have decided to prioritise safety in these cases, and to create measures that encourage people to report their mistreatment. They recognize that everyone benefits when all victims of crime are protected and abusers are held accountable.”

France, Greece, Italy, the Netherlands and Spain foresee some form of residence permits for undocumented victims of domestic violence, although many practical barriers exist, including high standards of proof, and the broad discretion authorities enjoy in granting these special permits. Indeed, these schemes exist in national contexts where undocumented victims who come forward still face a significant risk of detention and deportation.

The study is released as the EU adopted its Victims’ Rights Strategy, which recognises for the first time that undocumented victims are among those most vulnerable to victimisation.

NOTES TO THE EDITORS 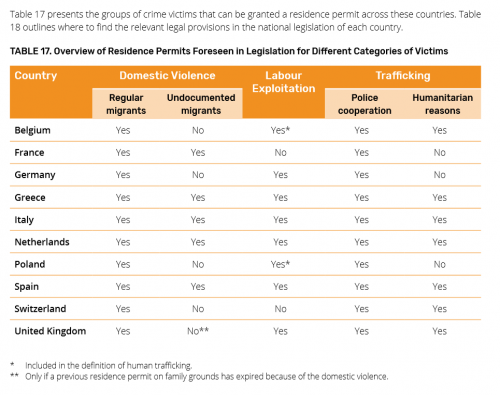