Following the unprecedented loss of an estimated 1,600 migrant lives in the Mediterranean in the first months of this year, heads of EU governments adopted a statement in a Special European Council meeting on 23 April 2015. The statement outlines the Council’s priorities aimed at “preventing further loss of life at sea and to tackle the root causes of the human emergency that we face”.

However, it highlights commitments towards increased securitisation of the external borders of the European Union and, among other priorities, commits to reinforcing Frontex-led operations in the Mediterranean and to the establishment of a “new return programme” for rapid return of irregular migrants to be coordinated by Frontex.

Processes of returning undocumented migrants to their countries of origin have been of great concern to PICUM and many of its members in recent years. Conditions of migrants in detention, including the detention of children in some countries, a lack of legal aid and violence during forced removals are examples where migrants face human rights violations in the process of return.

The position paper was developed with input from PICUM members who gathered for PICUM’s first meeting of the new working group on migration policies in Brussels on 5 December 2014.

Fundamental rights of undocumented migrants in the EU Return Directive

In Article 1, the Directive refers to the need of upholding fundamental rights in the process of returning migrants. Nonetheless, it fails to establish a principled policy on return which fully respects migrants’ dignity and human rights.

The directive provides the possibility for children to be detained as a measure of last resort and for the shortest appropriate period of time. The text clarifies that the best interests of the child shall be a primary consideration in the context of the detention of children awaiting removal (Art. 17). However, by allowing detention of children as a measure of last resort, the Return Directive breaches the principles of the UN Convention on the Rights of the Child, by failing to recognise that detention of a child because of their or their parents’ migration status always constitutes a child rights violation (A more detailed overview of the standards set out in the Directive is here.)
The European Commission argues in its Communication on the EU Return Policy that the Return Directive has positively influenced national law and practice regarding the primacy of voluntary departure, monitoring of forced return, and reduction of maximum detention periods across the EU.

Challenges and shortcomings around the implementation of the EU Return Directive

In its Communication of the EU Return Policy, the Commission, however, also recognises a number of shortcomings in several member states’ practices in particular in relation to the systematic use of alternatives to detention, the lack of independent forced return monitoring systems, detention conditions, the effectiveness of the return policy and the need to ensure protection of children and other vulnerable persons in return procedures.

“By their very nature, forced return operations have the potential to involve serious violations of fundamental rights. Through this investigation, I want to find out how Frontex is equipped to deal with potential violations and how it minimises the risk of such violations”.
– European Ombudsman, Emily O’Reilly who announced on 22 October 2014 to open an investigation into how Frontex ensures respect of fundamental rights in the context of forced returns under the agency’s joint return operations (JROs).

There is indeed a clear need to ensure compliance with fundamental rights in migration control mechanisms.  Based on experience in various member states, participants of PICUM’s working group stated that the use of systematic and prolonged detention, the detention of children and their families and human rights violations in the context of removal procedures are major issues of concern in relation with the implementation of the EU Return Directive.

The experience of PICUM members of the implementation of the Returns Directive in their countries is crucial to identify and address main challenges and shortcomings of the EU legislation. Moreover, these experiences from the ground illustrate the different approaches adopted by national legislators when implementing the Directive, for instance, the detention as a tool for migration management.

Recent legal developments in Greece and in Italy are good examples to illustrate the sometimes opposing approaches adopted by national legislators when considering the use of detention as a tool for migration management.

The use of prolonged detention remains a major challenge in Greece. Spyros Rizakos of PICUM’s member organisation Aitima highlighted how, in Greece, with the adoption of the State Council Legal Opinion 44/2014 on 20 March 2014, detention is allowed for virtually undetermined periods, beyond the maximum length of 18 months as established within the Return Directive. Thus, the national legislator is currently attempting to use detention as a deterrent for irregular migration, although evidence collected by researchers on the ground indicates that detention does not deter irregular migration, nor does it contribute to an increased effectiveness in removal procedures.1 On 9 February 2015, the Greek Deputy Minister for Public Order addressed the Greek Parliament as part of his first policy speech and made a commitment to ensure the end of indefinite detention of migrants under return procedures.2

Luca Masera of the Italian organisation ASGI explained that in Italy, with Law 161/20143 adopted on 30 October 2014, the legal time limits for detention were reduced from a maximum of 18 months to three months (90 days).4 The decision appears to be based on evidence provided at national level which shows the high costs and low effectiveness of lengthy detention as a tool for migration management.5

A major concern for PICUM and many of its members has been the practice of detaining children and their families in some member states. Detention of children can never be justified as in a child’s best interests, in line with the United Nations Convention on the Rights of the Child and further guidance provided by the Committee on the Rights of the Child through its General Comment n. 6 adopted in 2005.6 There are alternatives to detention which, however, are frequently not considered. Katja Fournier of the Belgian organisation Platform Kinderen op de vlucht – Plate-forme Mineurs en exil, gave the example of “open return houses” for families awaiting removal as an alternative to detention of children and their families adopted in Belgium in October 2008.

How can these shortcomings be addressed?

PICUM’s member organisations working on the issue agree that more evidence on the impacts of the EU Return Directive on migrants’ fundamental rights needs to be gathered.

It is crucial to advocate for law reform and access to justice, including for the use of national and international complaints mechanisms.

Strategic litigation could be a useful tool to address non-compliance with migrants’ fundamental rights during return processes and UN human rights treaty monitoring bodies should be targeted as a way to promote the rights of undocumented migrants at global level.

Key events at global level can also be an opportunity for civil society to address their concerns around the protection of migrants’ fundamental right. For instance, PICUM and several of its partners have delivered their messages at the Civil Society Days at the Global Forum on Migration and Development (GFMD). Civil society organisations have developed key documents such as the five-year eight-point Action Plan proposed at the UN High Level Dialogue on International Migration and Development held in October 2013 to be used as part of advocacy activities and dialogues with policy-makers and national governments.

Practices of criminalising undocumented migrants as well as their supporters remain a cross-cutting issue which has to be challenged by policymakers and civil society alike to prevent further violations of migrants’ fundamental rights. 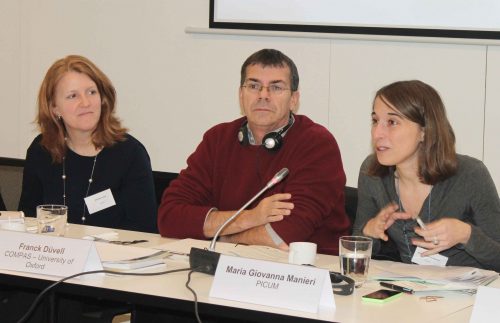 To strengthen networking among its members, facilitate more strategic cooperation on key policy issues, and ensure its network remains informed about developments at both national and European level, PICUM hosts the following thematic working groups: access to healthcare; fair working conditions; the situation of undocumented families and children; undocumented migrant women’s access to justice, legal strategies in advocating for undocumented migrants and since 2014 a new working group on migration policies. In 2014, PICUM also launched a new task force on housing and access to shelter which is jointly organised with the European Federation of National Organisations Working with the Homeless (FEANTSA) and members of both organisations.