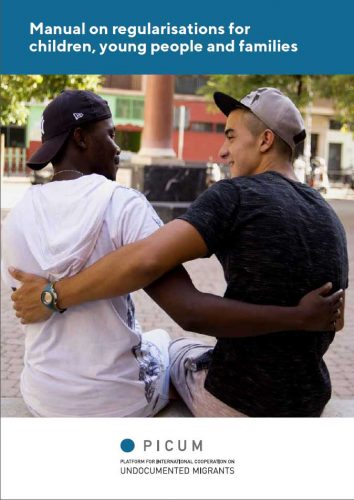 ©Justin Pogban. Córdoba Acoge. Photo taken by a young migrant in the context of a youth photo contest organised by the organisation Red Acoge.

us status gives rise to issues around identity and belonging, and planning for the future, at a critical time in young people’s development.

The full manual is accompanied by a separate document including the executive summary and policy recommendations as well as Talking points to argue for regularisations for children, young people and families’ to support organisations who address the issue with decision makers and key stakeholders.

The manual highlights key aspects of mechanisms and campaigns that have been found to be effective, as well as others that have been problematic or challenging. It aims to be a source of inspiration and reflection to support advocacy and technical level work on regularisations.

The launch of the manual coincides with a key EU level conference on children in migration where PICUM will also hold a workshop joined by several of its member organisations.