The European Parliament has adopted a resolution to end the criminalization and punishment of organisations and individuals who assist migrants in need.

The new guidelines for EU member states to prevent that organisations and individuals are prosecuted and punished for providing humanitarian aid come after recent cases emerged of European citizens who were arrested and prosecuted for rescuing and assisting migrants in need.

Among others, Italy announced to close its ports to NGO boats carrying out search and rescue operations and Hungary passed laws allowing to criminalise activities of civil society organisations which support migrants.

Current legislation allows EU member states to sanction persons who provide assistance to irregular migrants. However, the legislation provides an exemption if assistance is provided for humanitarian purposes. Only about a quarter of the EU member states have transposed this exemption clause into national legislation and an increasing number of citizens and organisations have reported harassment and punishments by authorities for helping irregular migrants (see testimonies here). 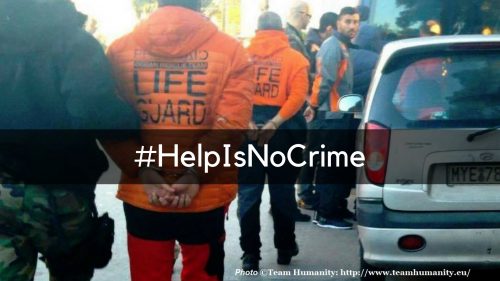 The resolution calls on EU member states to implement the Directive’s exemption and to ensure that prosecution is not pursued against individuals and civil society organisations assisting migrants for humanitarian reasons.

In a joint statement, the European Citizens’ Initiative “We Are a Welcoming Europe” and over 65 Members of the European Parliament (MEPs) welcomed the new resolution and highlighted that criminalising solidarity with migrants and refugees contributes to a shrink in civil society space and creates a hostile atmosphere for citizens and NGOs that practice their right to help those in need.

To sign the European Citizens’ Initiative ‘We Are a Welcoming Europe’, go to: http://weareawelcomingeurope.eu/

We Are a Welcoming Europe is the first European Citizens’ Initiative (ECI) on migration. The ECI is the EU’s official tool for its citizens to demand action and legislative changes on migration if 1 million EU citizens sign the petition across seven EU member states. The citizens’ initiative also calls on the European Commission to prevent EU member states from imposing sanctions on individuals or NGOs that provide humanitarian assistance to migrants. Follow and share #WelcomingEurope

You may also follow the debate on social media: #HelpIsNoCrime