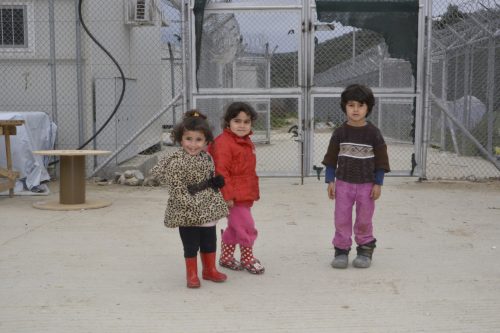 PICUM and other members of the Initiative for Child Rights in the Global Compacts, UN agencies and bodies, global, European and national organisations, welcome the European Commission’s initiative to dedicate the 11th European Forum on the Rights of the Child to the topic of children deprived of their liberty – including children in immigration detention – and alternatives to detention.

The organisations call upon EU governments to take immediate steps towards ending child immigration detention, ensuring alternatives to detention are accessible and available. All of Europe’s children deserve care and protection, regardless of their migration status. Let’s work together to end child detention.

“We were treated as criminals. Governments may use different words to make these policies sound acceptable, however it is the same as I was being deprived of my liberty without cause… As a child at the time, I saw many things that no child should see…”
– Pinar Aksu, detained at 14 years old for over two months when her family sought asylum in the UK.

Migrant children are Europe’s children too

Migrant and refugee children deserve the same robust care and protection the EU grants to European children. This care and protection falls under states’ responsibility and is an urgent priority. This means that children’s best interests must be given priority over Europe’s migration agenda. This is not only the right thing to do – it is a legal imperative, as stated by the European Court of Human Rights and the Committee on the Rights of the Child.1

Detention has a profoundly negative impact on children’s health and psychosocial development. Even short periods of detention in so-called “child-friendly” centres threaten children’s right to health, education and family life. Children are treated like criminals, separated from their friends, schools, communities and even their parents or loved ones. This is not how we should treat children who escape war and violence or who migrate in search of family or a better future.2

“I want to stress that throughout the course of our journeys, the lives of unaccompanied children are in great danger. Smugglers, traffickers, border guards, police or even fellow travellers take advantage of us, and everywhere I’ve been I’ve witnessed children become the targets of violence, exploitation, rape and abuse… Children deserve appropriate care, protection and support – not closed camps, hot spots and other forms of immigration detention.”
– Gholam Hassanpour, assaulted by members of the coast guard and detained on arrival in Greece at 16 years old.

Europe can and must do better

On 19 September 2016, the Heads of State of all 193 UN member states adopted the New York Declaration for Refugees and Migrants.3 The declaration commits all UN member states to work towards ending child immigration detention by prioritising alternatives to detention (para. 33). Furthermore, at the EU level, the European Commission communication on the protection of children in migration4 has recognised the negative impact of detention on children and that everything possible must be done to ensure that a viable range of alternatives to the immigration detention of children is available and accessible.

Yet immigration detention of children and families is still widely used in the EU and has become a growing feature of European migration policies. This risks sending the message that Europe cares more about migration enforcement than protecting children.

It doesn’t have to be this way. Alternatives to detention exist, but in many countries they are only used for a small fraction of children and families, and focus more on enforcement and controlling migrants rather than ensuring the care, protection and welfare of children.

However, a recent report by the European Union Agency for Fundamental Rights shows that some EU member states, human rights institutions, UN agencies and civil society practitioners are investing in human rights-based, child-friendly alternatives to detention.5 The results are positive. For example, placement options within the community, with proper case-management support that focuses on ensuring the best interests of the child, have been shown to be effective in meeting states’ legitimate objectives around compliance and case resolution. Additionally, Ireland has successfully prohibited the immigration detention of children, while other states such as Spain, Italy, Malta, the UK and Portugal have implemented successful alternatives to detention for migrant children and families. Across Europe, civil society organisations are also developing case management-based alternatives to detention and sharing information and best practices through the European Alternatives to Detention (ATD) Network.6

Data collection and monitoring are critical

Many EU member states do not collect or make public the numbers, length and reasons for the detention of migrant children. Yet adequate data is crucial for well-informed decision making, documenting good practices (including alternatives to detention) and providing recommendations for law, policy and practice to prevent and significantly reduce the number of children deprived of liberty. For this reason, the UN General Assembly has invited the UN Secretary-General to commission an in-depth Global Study on Children Deprived of Liberty. It is vital that this study be undertaken. 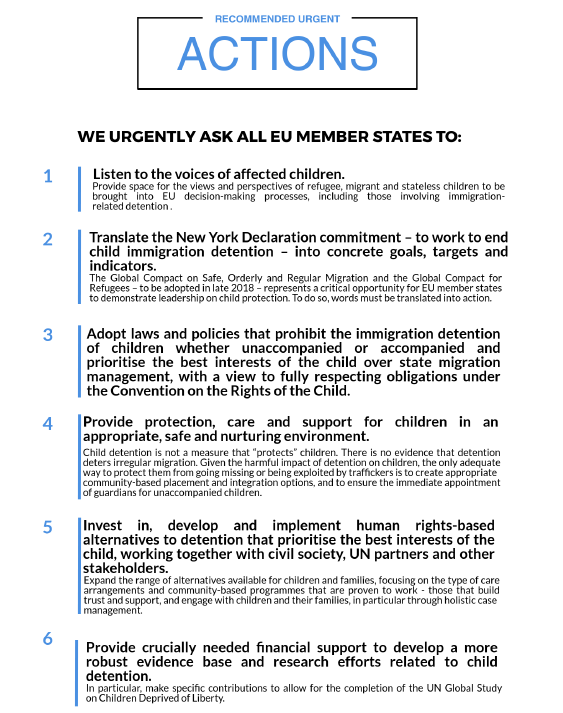 This statement is endorsed by the following members of UN agencies and bodies, global, European and national organisations, and the Initiative for Child Rights in the Global Compacts: