In December, several news outlets reported that a pregnant woman who went to the police in the UK to report having been raped was brought to a sexual assault centre – and later arrested and interrogated about her immigration status.

In August, Swedish police raided a summer camp organised by the Church of Sweden in Malmö. About 30 police officers surrounded a hostel in the forest where five undocumented families had just settled in for a weekend. Most of these families have now been deported.

Such incidents are not anomalous. They occur in many areas of people’s daily lives when bodies charged with helping people – such as social welfare offices, social services, hospitals, schools, law enforcement, labour inspectorates – instead become enforcers of immigration policies.

The result is that attempting to access public services is more and more difficult, and exposes people who are undocumented to detection and deportation.

In the current political context, irregular status, and migration more generally, have become tied to words like “fear”, “security” and “criminality” in the media and by some politicians. The absence of proper administrative status is increasingly criminalised as a way to somehow discourage irregular migration, pushing people deeper into social exclusion, and denying the broader causes of precarious status.

The obligation to report undocumented migrants is usually justified in the name of tough immigration control, but comes at a heavy cost, undercutting our most basic ethical principles. These principles are reflected in professional standards, and in the legal frameworks states have signed up to, which guarantee the same fundamental rights to everyone, regardless of their nationality, background or immigration status. These include the rights to health, an adequate standard of living, housing, social security, and education, as well as fair working conditions and the right to a fair trial and legal redress.

International institutions, NGOs and academics put a name on the solution: the concept of the ‘firewall’ – a clear separation between immigration enforcement activities and the provision of essential services. 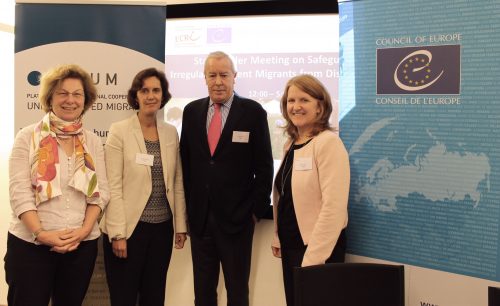 On 26 October 2017, PICUM, together with the Council of Europe’s European Commission against Racism and Intolerance (ECRI) organised an event at the Council of Europe bringing together people from different countries to share information and exchange good practices on the firewall.  The hope is to increase understanding of the firewall and to share examples of how it has been put into practice both at the national and local levels to better safeguard undocumented migrants from discrimination.

ECRI published guidelines in May 2016 that give clear recommendations for European governments to implement firewalls. They urge governments to “ensure that no public or private bodies providing services in the fields of education, health care, housing, social security and assistance, labour protection and justice are under reporting duties for immigration control and enforcement purposes”.

The ’firewall’ concept in practice

Fortunately, some good and inspiring examples of “firewalls” already exist in Europe both at the national, regional and city levels.

In Sweden, the law was changed in recent years so that access to health care is now guaranteed and free for all children under 18 and for all adults in case of emergency without any requirement to provide documents. The Swedish government also implemented the same strong rules on confidentiality for non-citizens that were already in place for citizens, both for access to health care and education, creating a robust firewall in the sphere of health. In practice this means that patient confidentiality includes undocumented migrants. Health care workers are thus not allowed to disclose undocumented patient information to anyone. The only exception is when a Court, prosecutor, police officer or tax authority demands to know if a certain person is being treated at a health care institution. In this case, the personnel have to give an answer to a direct question.

At the city level, Amsterdam has adopted a program called “Everyone’s Police”, which encourages the reporting of crimes in the interest of more effective policing and community engagement. To reach undocumented residents, the police organises monthly information sessions. In 2016, a safe reporting policy based on the Amsterdam model was rolled out nationwide in the Netherlands to encourage people who are undocumented to approach the authorities to report crimes and to promote trust.

Following the devastating fire in Grenfell tower – a social housing block in London where about 600 people lived, many of them undocumented – in June 2017, resulting in 71 deaths, the Home Office offered immigrants who survived the fire the chance to claim a 12-month period of limited leave to remain in the UK with access to state support and assistance if they came forward. This measure raised considerable criticism from civil society, which argued that it gave undocumented survivors little incentive to come forward because of their legitimate fear that giving their details to the Government would leave to their removal from the country after the 12-month ‘amnesty’ period. Thanks to the pressure of the civil society, the Home Office announced in October that survivors with uncertain status would have the chance to become permanent UK residents.

These initiatives came about because of a recognition that enforcing immigration rules at the expense of fundamental rights has devastating effects on individuals, and is also undercuts important priorities in other areas – such as ensuring safe communities, investigating crimes, providing protection and support for people in need. States’ prerogative to enforce migration laws should not come at the expense of degrading trust in public institutions, and our confidence in the independence and integrity of service providers.