Human rights defender Andy Hall has been sentenced by the Prakanong Court in Bangkok, to pay a fine of 10 million baht (€ 260,000) in damages to the American company Natural Fruit Ltd. He also will have to pay 10,000 baht for the plaintiff lawyer and the court fee.

Since 2013, the company has filed four claims against Andy Hall accusing him of criminal defamation after he exposed labour rights abuses and exploitation of mostly migrant workers at a pineapple processing facility owned by Natural Fruit Company Ltd. in a report published by the Finnish civil society organisation Finnwatch,

The focus of the current ruling was also an interview that Hall offered to Al-Jazeera on the topic, which according to the company, hurt its reputation. 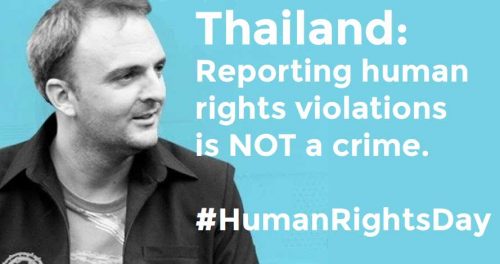 Andy Hall had to leave Thailand in 2016, concerned about his own safety due to the legal harassment he suffered after the poultry producer Thammakaset Farm sued him in another case. The case has been ongoing for 5 years within the Thai justice system.

According to Sonja Vartiala, Executive Director of Finnwatch, this decision “comes as a shock” and “restricts freedom of expression and prevents exposing human rights violations”.

In the same vein, Andy Hall has expressed his disappointment on his Twitter account, where he wrote: “This verdict is a major setback for rights of human rights defenders, migrant workers, labour/migration activists and researchers everywhere and casts a dark shadow over recent positive progress the Thai government and Thai industry has made to improve migrant worker conditions”.

Human rights organisations have previously criticised that allegations against Andy Hall are an attempt to limit the activities of human rights defenders to expose abuse and exploitation.

For more information on the case of Andy Hall, click here. http://finnwatch.org/images/NaturalFruitvsAndyHallQA_March2018.pdf