Access to Justice for Undocumented Women: A Reality in the EU?

On Thursday 21st June, the launch of a seminal report on undocumented women was cohosted by members of the European Parliament from across the political spectrum.

PICUM’s report on ‘Strategies to End Double Violence Against Undocumented Women’ was greeted by a packed room at a lunchtime event in the European Parliament in Brussels. Policy makers and staff from the European Institutions were joined by over 40 external guests representing a broad range of European networks, humantarian agencies, migrant support organisations as well as governmental agencies and equality bodies.

Welcoming the crowded room of participants, Mikael Gustafsson MEP and current Chair of the European Parliament Committee on Women’s Rights and Gender Equality (FEMM)underlined how discriminatory laws create vulnerability for undocumented women and lead to more violence. He identified the need to provide full protection and justice for undocumented migrant women including access to support and services, an independent legal status, and access to women’s shelters. Thanking the many frontline organisations working with undocumetned women who, he recgonised their crucial role in trying to change the current situation, underlining “I am looking forward to looking at the long term vision and also, about the most immediate and pressing decisions to be taken”.

PICUM Board member Mr George Joseph provided an overview of PICUM’s report “Strategies to End Double Violence Against Undocumented Women: Protecting Rights and Ensuring Justice”. With undocumented women across the EU turned away from women’s shelters and risking arrest or deportation if they contact the police, PICUM’s report responded to growing recognition of the need to prioritise women’s protection needs, presenting a broad range of legislative, policy and practical measures that succeed in putting victims first, migration status second. From partnerships between police and local NGos, to regional initatives and national legisation, ‘Strategies to End Double Violence Against Undocumented Women’ proves how this can be done practically, coherently and in accordance with the duties of law enforcement, legislators, civil society, and policymakers. The examples were testimony to the agency, capacity and impact of migrant women themselves in bringing about change. PICUM’s report provided an overview of the laws, practices and partnerships that respect rights and ensure justice for all women in Europe without discrimination. It shows what works, where, and how it came about. 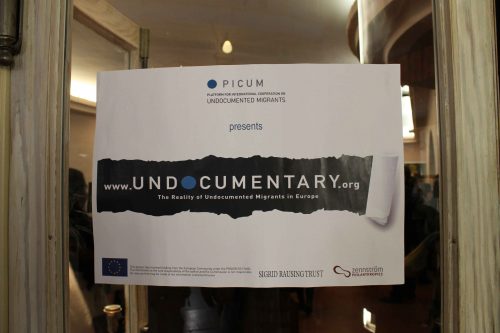 Screening of “Undocumentary”, a forthcoming web-documentary on the daily realities of undocumented migrants in Europe made by PICUM

To provide some insight into the realities on the ground, PICUM screened an excerpt from UNDOCUMENTARY its forthcoming webdocumentary due for release later in the year. The video highlighted the impact current policies have upon undocumented women experiencing violence, and the strain placed on NGOs, professional networks, and local authorities working to support and protect them. “I am very alone, nobody helped me,” recounted Myriam, an Afghani woman living in Sweden about her experience of violence as an undocumented migrant, “I can’t go to the police, it was a very bad situation.” Having fled an abusive family situation, Myriam was destitute and living on the streets when she was found by another man who also began to sexually abuse her. Myriam’s undocumented status meant that she had no access to support, protection, or justice. The destressed woman explained how her irregular status was used by her abuser to perpetuate isolation and control,  “He said, if you go back, I call the police and say ‘she has no paper, you can come and take her!’”.

Trifa Shakely of the Swedish campaign for undocumented migrant women’s right to protection “Ain’t I a Woman?” explained how supporting those like Myriam had provided the “No one is illegal” network with extensive knowledge and experience regarding the twofold repression facing women in an undocumented situation.

The “Ain’t I A Woman?” campaign saught to provide undocumented women with the protection and justice to which all women are entitled.

“Because of their lack of rights, undocumented migrant women are, easy targets for people whom are aware of their situation and use their position of power to threaten, rob, blackmail or expose these women to sexual harassment and/or assault”, explained Trifa, “Many of the women lack the possibility to defend themselves and get help, or report to the police, because they are hiding, not just from the government, but also from violent people aware of their situation”. Their experience showed that perpetrators who threaten, rape, abuse and blackmail undocumented migrant women were often well aware that making a police report or arrest was a big risk for these women.

The campaign saught to ensure that all women in Sweden were entitled to live a life free from violence without discrimination of any kind. As Trifa underlined, “The fact that these women haven’t got a residence permit in Sweden does not deprive them from the rights that women have been fighting for for the past 100 years”. The campaign demanded positive changes in the asylum procedure to address women’s protection needs, that legislation to protect women prevailed over the immigration control, and that undocumented migrant women participating in a judicial process received a temporary residence permit.

Thanking PICUM for producing a report presenting good practical measures alongside a wider case for policy change, Jean Lambert Green MEP for London noted how the testimonies from undocumented women highlighted how failures elsewhere had caused many to become irregular. “Whether you are a supporter of border controls or not, the failure of the current system in so many places becomes absolutely crystal clear,” she explained illustrating how small changes in procedures could give a much better chance to women migrants and offer an early response to avoid them becoming undocumented, “Part of the challenge is how to prevent people from becoming undocumented, there are things in the legisaltion we can improve, things in the practice we can improve”. Ms Lambert emphasised the importance of  providing migrant women with an independent migration status, “The failure of the system to see women as individuals in heir own rights, with something to contribute rather then a ‘trailing spouse’ comes up time and time again.”

“When looking at access to justice, the focus should be one the crime and not the status of the victim”
– Jean Lambert, MEP (European Greens, United Kingdom)

Finnish MEP Sirpa Pietikäinen of the centre-right European People’s Party began by underscoring the prevalence of violence against migrant women, ‘The numbers misused and abused when they arrive regularly or irregularly to Europe are staggeringly high and we are not doing as much as we could or should to address this problem,” she said adding that “Women’s rights are human rights. They are as important as any other rights and have to be dealt with same serious attitude.” A key figure in promoting gender-equality at European political level, Ms Pietikäinen affirmed her support for providing a special status to undocumented women facing violence who testify in a trial. Resonant of the protections provided under Spanish legislation , she stated that “Undocumented women experiencing violence should receive a legal status if they testify against their offenders. Violence against women in a crime and should be dealt with as a criminal case; there is a need for a testimony and this should carry with it a legal status for the women providing it”.

“Undocumented women face a double risk of being misused and their rights being violated. Double the risk for women means that we should have double the protection.”
–Sirpa Pietikäinen, MEP (European People’s Party, Finland)

Each MEP also outlined ways through which undocumented women’s lack of access to justice could be advanced at the European policy level, offering key steps that parliament could take.

Ms. Jean Lambert ( saw the need to bring local and national level solutions, such as good practices with local police or the funding of women’s shelter places for undocumented women in some member states, could be implemented at European level.  “All of us should be looking at the examples of good practices in this PICUM report to see what more we can do to support work in our own member states because after all, when looking at Euoprean legislation its our national governments that are also part of that negotiation process so having something positive on the table at national level would be a welcome step forward”.

Assessing the severity of the situation facing undocumented women, both from a perspective of numbers as well as human rights, Sirpa Pietikäinen (EPP) suggested that the Parliament push the Council of the European Union as well as the European Commission to have a specific action programme on the issue. “There are so many things that should be done simultaneously,” she explained “Activities on the national level, changes in our legislation, and this issue deserves a specific action programme by the Commission and Council.”

In concluding the lunchtime event, Mikael Gustafsson declared his hope that the PICUM launch was the start of some positive change on undocumented women’s issues at the European policy level and emphasised the important role of civil soceity organisatisations in pushing discussion into action. “As MEPs we need inputs ideas, proposals and suggestions of how to do things,” he stated “This issue is important for us, and you are important to us”. He reaffirmed the need to push the Council of the European Union to change their poisiton, to stand up for migrant rights and in a broader perspective ensure rights and justice for undocumented women.

PICUM’s report ‘Strategies to End Double Violence Against Undocumented Women’ is now available for free download from the PICUM website in English, French and Spanish.