Over the past decade of advocacy work for the rights of undocumented migrants, the Platform for International Cooperation on Undocumented Migrants (PICUM) has recorded how immigration control has constantly been given priority over the rights of the child.

The absence of child rights in migration policies is notable. There is little systematic consideration of the impacts of migration policies on children, who are usually subject to the same immigration control measures – including detention, deportation and limited access to essential services – as adults, particularly when accompanied by a parent or other caregiver. Even in individual decisions affecting children such as granting or refusing status or detaining or deporting children and their families, the impacts on the child’s rights are rarely given adequate attention and significance.

These shortcomings – the gaps between governments’ legal obligations to children on paper, policies and practices – were the center of a debate co-organised by PICUM and Nathalie Griesbeck MEP, Group of the Alliance of Liberals and Democrats for Europe (ALDE) at the European Parliament on 14 November 2013. The event built on the European Parliament resolution of 12 September 2013 on the situation of unaccompanied minors in the EU (2012/2263(INI). The shadow rapporteurs of this report contributed to the discussions including MEPs Hélène Flautre (Greens/EFA), Anna Maria Corazza Bildt, European Peoples’ Party (EPP), Kyriacos Triantaphyllides (GUE/NGL), Timothy Kirkhope (ECR) and MEP Birgit Sippel (S&D). 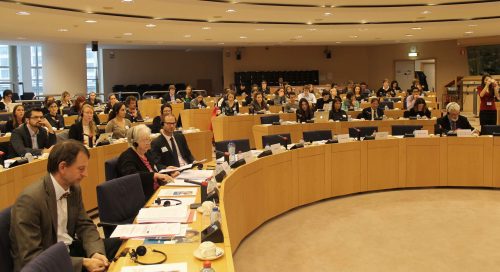 Participants at the hearing “A Child is a Child. How Can the European Union Ensurethe Rights of Undocumented Migrant Children and Families?”, European Parliament 14 November 2014

Who Are Children in an Irregular Migration Situation and What Rights Frameworks Exist? 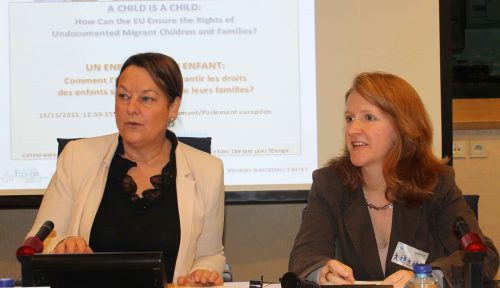 The problem is these frameworks are not being applied to all children, regardless of their migration status. PICUM Director, Michele LeVoy, noted that children should always be considered, first and foremost, as children.European Union laws should protect all children’s rights. MEP Nathalie Griesbeck emphasized that the EU is legally bound to ensure the human rights of all children in all EU actions, in accordance with the European Convention on Human Rights, the Charter of Fundamental Rights of the European Union and the Treaty on the European Union.The residence status of children is usually linked to their parents. Children thus become undocumented when their parents do (for example, due to loss of employment, relationship breakdown, refusal of an application for asylum), or because they do not qualify for official family reunification. Children are also born as ‘undocumented migrants’ in Europe because their parents are undocumented. Children with a regular residence status and even citizens can also be greatly affected by the irregular status of a parent. To discuss the challenges both these groups face, we often speak about ‘children in an irregular migration situation’.

The EU has made some important developments in the protection of unaccompanied children such as the EU Parliament’s report on the situation of unaccompanied minors in the EU(2012/2263(INI)). These measures need to be strengthened and moreover, adapted to protect the rights of all children in immigration procedures, including those with their families.

Verena Knaus of UNICEF noted that being with your parents does not protect you from drowning at sea or the harmful impacts of detention, nor does it replace public education or mean you have access to necessary medical care. Therefore, the EU should expand its focus from unaccompanied children to ensure the rights of all children are realised, including undocumented migrant children who are accompanied by family members.

“Currently they (immigration authorities) only take into consideration the parent and the parents’ case, but they must also listen to the children and what the children want.”
– Undocumented girl, Kids Parlement

Members of the ‘Kids Parlement’, which was founded in January 2013 in Belgium by migrant children to promote respect for children’s rights, spoke about their persistent fear of being deported to their countries of origin and about the frustration they feel not being listened to or considered by immigration authorities. The young peoples’ testimonies highlighted the lack of stability – having to move and have their schooling disrupted for administrative procedures, and not receiving recognition of their efforts and potential, let alone the support they need to achieve it.

In most countries, laws and policies exclude children from receiving essential services, protection and justice, because of their residence status.1 In addition, their access can be blocked by practical barriers. For example, some undocumented children are unable to register for schooling because they cannot provide the necessary documents, even in EU member states where undocumented children have the right to attend schools.

“Migrant children accompanied by families as well as unaccompanied children who are undocumented and fall outside of state care often come across discriminatory laws and practices and encounter obstacles when accessing fundamental rights such as the right to adequate housing, the right to health care and the right to education.”
– Georgia Dimitropoulou, European Union Agency for Fundamental Rights (FRA) 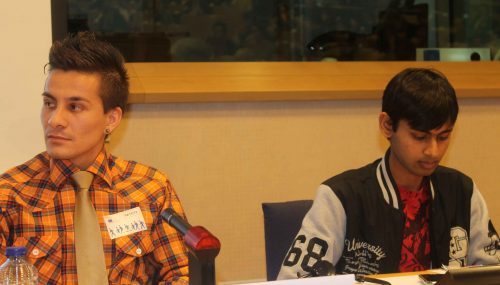 Noting that the children of undocumented migrants are at high risk of poverty and social exclusion, Maya Carr-Hill, DG Employment, European Commission presented the European Commission’s Recommendation, “Investing in children: Breaking the cycle of disadvantage, which stresses that it is essential to invest in all children and their access to services. It sets out principles to guide the policy-making of member states, including the development of integrated strategies based on three key pillars: access to adequate resources, access to affordable quality services and children’s right to participate. The second key pillar calls for particular attention to be given to the needs and rights of undocumented children to access their universal right to health care. 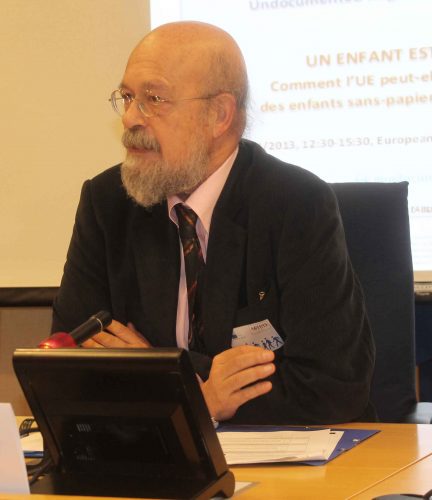 Although the Commission Recommendation gives policy guidance and is not law, Petros Stangos, Vice-President of the European Committee of Social Rights, Council of Europe emphasised the obligation of all EU member states to ensure social rights as parties to the European Social Charter. Mr. Stangos outlined how the European Committee on Social Rights, as a judiciary body of the Council of Europe, has issued decisions2 against states that do not respect the social rights of children, regardless of status, following complaints from NGOs.

The EU Fundamental Rights Agency – FRA has developed guidelines entitled “Apprehension of migrants in an irregular situation – fundamental rights considerations”. These guidelines encourage member states to de-link immigration control from the provision of services and justice, to ensure that undocumented migrants can access services such as health, education and birth registration, and turn to the police, without fear of apprehension.

The European Network of Ombudspersons for Children (ENOC) has adopted a position entitled “CHILDREN ON THE MOVE: CHILDREN FIRST!” which addresses all children who migrate from their country of origin to and within the territory of a European country. The position paper provides recommendations how to uphold migrant children’s rights, irrespective of status.

“Around two thirds of member states do detain – at least occasionally – minors as well as families with minors. Only around one third of member states never detain minors.”
– Fabian Lutz, DG Home Affairs, European Commission

Jan Jarab of the OHCHR Regional Office for Europe underlined that, according to the UN body that monitors the implementation of the Convention on the Rights of Child, detention is always a violation of children’s rights and can never be in their best interests3. In this light, the safeguards in EU law should ensure that children and families are not detained. When there are reasonable grounds for any deprivation of liberty, the Committee on the Rights of the Child’s report of the 2012 Day of General Discussion on the rights of all children in the context of international migration urges the development of community-based alternatives to detention for children in irregular migration situations.There is substantial evidence that detaining children has harmful physical and mental health impacts for the well-being and development of children. Gill Baden of the Campaign to Close Campsfield gave the example of the UK. The UK government has committed to end child detention but maintains facilities called ‘pre-departure accommodation’ which retain many of the features of detention which can have negative impacts on children.

Panelists discussing the role of EU institutions in ending immigration detention of children.

Fabian Lutz of DG Home Affairs of the European Commission explained that the EU Returns Directive and the new Reception Conditions Directive contain rules on the conditions for detaining children in the context of return and asylum procedures. In both situations, the laws state that children should only be detained as a last resort and for the shortest period of time. Both remind states that the best interests of the child should be a primary consideration.

In practice, around two third of member states make use – at least occasionally – of the possibility to detain as a measure of last resort  both unaccompanied children and children that are with their families. A more systematic application of alternatives to detention may help to reduce the need to apply detention as well as the length of detention4.

Ben Lewis of the International Detention Coalition (IDC) highlighted that alternative to detention (ATD) practices that are being used by states are on average 80% less costly than custodial detention models and better protect the rights of children and their families in immigration enforcement proceedings, while still addressing governmental migration management objectives. Furthermore, ATD practices currently being used across Europe don’t always recognize the full spectrum of ATD options and may be overly restrictive, leading to less effective case resolution and compliance outcomes. European governments would benefit from exploring stronger case management, screening and assessment, and community-based alternative models.

The hearing’s discussions illustrated the urgent need for EU action to address the violations of migrant children’s rights in the European Union and meet the EU’s legal obligations to every child.

2014 marks the development of strategic guidelines in the area of Justice and Home Affairs, which will largely define the future of EU policies on migration and asylum in the coming five years and will replace the current Stockholm Programme.

2014 also marks the 25th anniversary of the United Nations Convention on the Rights of the Child (CRC) to which all EU member states are signatories.

The process to develop strategic guidelines for EU migration policy in the coming years provides a crucial opportunity to address this need. Children’s rights should be a clear priority in the new framework.  Concrete proposals have been elaborated by PICUM, in partnership with other civil society organisations, and include the following: